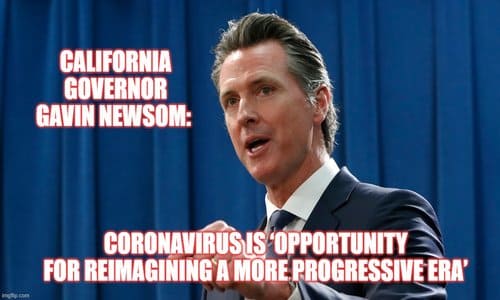 As government measures to contain the coronavirus become increasingly draconian--in Canada, people are now getting fined $1,000 apiece if there are more than two people from different addresses in the same vehicle--some are beginning to wonder where this all ends.

British columnist Peter Hitchens, predictably, is swimming upstream of accepted opinion, asking whether the wholesale surrender of liberties is the right response. Over at National Review, Michael Brendan Dougherty (who agrees that these measures are temporarily necessary) wrote a thoughtful piece titled "Let's Never Get Used to This":

In Britain there is a reported surge of citizens snitching on each other, self-righteously calling the police to turn in neighbors who exercise outside more than once a day. Tabloid newspapers print large photographs of everyday people shopping and ask their readers if they think the action depicted was really necessary.

Police in Darbyshire used a drone to film hikers taking legal exercise (even this phrase is sinister), then publicized the video on social media and encouraged a spasm of public outrage at those not sheltering in place. The same police also poured black dye into a lagoon to deter hikers who might take selfies in it.

Now, even pollution is necessary for public health and safety.

European countries such as Germany are considering handing out antibody certificates, which would allow one to move about freely if he had provably survived the virus and could demonstrate some immunity.

One can see the logic of a measure like this, but it is a logic that vitiates freedom: One's physical presence in normal life is presumed to be so potentially toxic and dangerous that it is preemptively disallowed. The unintended consequences of this are easy to imagine.

It is genuinely surreal to consider how quickly we went from a normal society to nations on lockdown, how swiftly our freedoms were eliminated-and how swiftly everyone gets used to an extraordinarily bizarre new "normal." I agree with Dougherty that these measures seem necessary for the time being, and like many others am working from home--but it still seems as if each new day brings something else that the 2019 versions of ourselves would have scoffed off as impossible in the West.

In London, Ontario, for example, a separate phone line has already been set up so that people can report on each other if they appear to be ignoring the social distancing guidelines, a "We're All In This Together" snitch-line. Necessary? Maybe. Sinister? Definitely.

I am very concerned that progressive politicians who cannot gain support for their dramatic reordering of society at the ballot box may attempt to utilize these unique circumstances to implement their agenda.

Many climate activists, chronically incapable of reading a room, have already demanded to know why, if governments can shut down whole societies to fight COVID-19, they cannot do the same for climate change.

For the time being, everybody is ignoring them. The culture wars are still ongoing, too-the New York Times ran an op-ed earlier last week blaming evangelicals for inflicting "coronavirus hell" on America, and State senator Brad Hoylman, who is gay, responded to Samaritan's Purse setting up a relief hospital in New York's Central Park by telling NBC News that it is "a shame that the federal government has left us in the position of having to accept charity from such bigots."

We've already seen the totalitarian instincts of many progressives on display here in Canada, where Justin Trudeau--who leads a minority government--attempted to take advantage of the COVID-19 crisis by seizing power for up to two years, giving his government the power to tax and spend without the approval of Parliament.

This attempt was shut down by the opposition parties, but nobody really doubts that if Trudeau had still been in possession of a parliamentary majority, that he would have legislated his Liberals near-total power already. For progressives, opposition is a nuisance to be dispensed with.

California governor Gavin Newsom was perhaps a bit more honest than he intended yesterday when a reporter asked him point blank whether he planned to use this crisis to further his political agenda: "Many aspects of policy have taken place, changes of policy have taken place that I think a lot of people have found surprising," the reporter said, citing unemployment benefits and a ban on corporate stock buybacks. "I'm wondering if you see the potential, as many others in the party do, for a new progressive era and opportunity for additional progressive steps?"

Newsom, recognizing danger, circled the question, but then finally came out and said it: "Yes. There is opportunity for reimagining a progressive era as it pertains to capitalism," Newsom said. "Forgive me for being long winded but absolutely we see this as an opportunity to reshape the way we do business and how we govern."

And there we have it. Progressives do not believe in wasting crises, and even if the public has temporarily granted sweeping powers to the government to halt a pandemic, it is essential that we remain vigilant.

As Trudeau proved, and Newsom indicated, these leaders will be looking for opportunities to reorder society--and thus, as Dougherty pointed out, it is important that we never, ever get used to this.