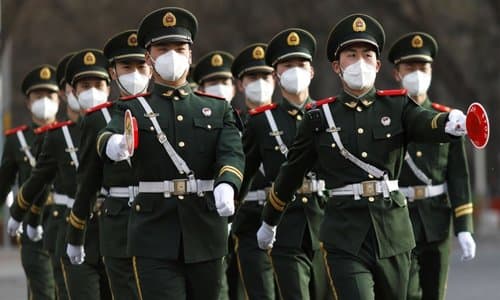 The coronavirus may be strengthening the determination of China's government. So far, it has been trying to guarantee absolute loyalty from its populace through surveillance technology and turning China into a spookily Orwellian society. Any hope that the West may have harbored in the past about China evolving into a member of the liberal-democratic international order, should by now be considered dead, expired, extinct.

China has not only been stealing intellectual property from the West for years, as US President Donald J. Trump has long observed; it has also behaved abysmally during the coronavirus crisis in Wuhan -- and maybe also before.

It is still not known if this coronavirus originated in one of China's "wet markets", which have probably caused other diseases, or in a bio-weapons laboratory -- and we may never know. What we do know is that when the World Health Organization and the US Centers for Disease Control offered to help, China ignored them.

It is also still not known if the coronavirus, as some have suggested, may have been a clever "war by other means" to roadside President Trump, his undesired trade deals, his upcoming re-election campaign -- and possibly even the US and the rest of the planet -- to advance China's alleged plan to take over the world.

The other possibility, of course, is that this coronavirus outbreak really was just an accident, fortuitous for China, and not part of a plan for expansion.

We may never know that, either. What we do know, once again, is that China, for years, has not played it straight about most things (for instance, here and here); that it lied about this epidemic not only to the West but to its own people as well; that it even lied about what country was responsible for the virus, and that even the medical equipment and testing kits it sold to Spain for nearly half a billion dollars, and to Turkey, the Czech Republic and the Netherlands turned out to be defective.

Worse, China's wet markets, which were to have been closed, have apparently been reopening.

It is probably long overdue to cease fantasizing about the transformation of China's totalitarian regime. The West also needs to beware of abetting Beijing's building of what US Vice President Mike Pence referred to in October 2018 as "an unparalleled surveillance state," as some Western technology and security companies have been doing, possibly inadvertently.

Take the American biotechnology product-development firm, Thermo Fisher Scientific, for instance, which announced in March that it would stop selling its DNA-processing equipment in China's Xinjiang province, after discovering that it was being used to collect biometric data on the region's residents for what appear to be nefarious surveillance purposes.

Other Chinese companies such as Hikvision and Dahua -- appear eager to cooperate with the communist Chinese regime's effort to establish total control within (and eventually beyond) China's borders, by providing its security services with advanced facial-recognition and other high-tech capabilities. These systems enable Chinese police to create a reliable, around-the-clock monitoring system for the entire country.

Beijing justifies the move by claiming that it is merely an efficient way to fight crime -- and to suppress Falun Gong cults. Nanchang police said, for example, that its use of special facial-recognition glasses enabled the identification and apprehension of a wanted criminal in a crowd of 60,000 attending a rock concert.

Yet, the regime appears to be driven by a desire to develop portfolios on "key individuals" deemed by Beijing to oppose and pose a threat to communist rule. The same surveillance systems being used to catch criminals are also now being employed in an endeavor called "key population management".

Beijing is already operating the initial stage of its "Golden Shield" plan to cross-reference and integrate all local and national records of every Chinese citizen. In addition, the regime uses a system of sensors on the Internet -- through a "Great Firewall" -- to filter out material it considers "objectionable." Through this barrier, Chinese citizens are denied access to Google, Facebook and other sites.

The most pernicious of the Chinese regime's surveillance techniques is the "Social Credit System," through which each citizen is assigned a score based on his or her behavior. Although it is not yet fully operational, the system is slated to be complete and in place during 2020.

As reported earlier, according to the system, a citizen can increase his or her score in a number of ways, such as by reading Xi's speeches, viewing propaganda films and participating in Communist Party-sponsored events.

Activities that lower a citizen's scores include littering, jaywalking and demonstrating against the government.

Low scores can result in penalties, such as the denial of a person's right to ride fast trains, take domestic flights in China, or obtain a passport to travel abroad. Low scores also affect a person's children's university or job opportunities.

This "Social Credit System" also incentivizes citizens to improve their own score by serving as informants against others.

China's drive for controlling its citizenry potentially poses a grave global threat: societies run by authoritarians, such as Russian President Vladimir Putin, are likely to exploit the same monitoring technologies Beijing employs to perpetuate their own monopolies on political power.

Even democratic societies could be seduced by the allure of surveillance techniques, purportedly to "protect national security," while simultaneously demolishing individual liberty. China is a threat to all of us.