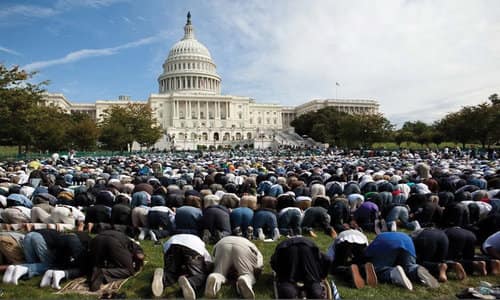 If control over body and space is the most visible sign of Islamists, then it stands to stay that hijabs, mega-mosques and emerging political clout are how Islamists mark their territory.

The problem, of course, isn't just about hijabs or mega-mosques, but the entire pattern that involved a web of interconnected problems.

From hijabs and patriarchy, distorted theology stemming from the most extreme interpretations of Islam, to foreign investments in theological structures (mosques), lack of education, gangs and honor violence -- all these factors are connected.

At the end of the day, the Islamist narrative in the West ends up dictating what it means to be a Muslim.

Muslims become a source of pride for some political parties that love the victimization narratives, while for Muslims themselves, these definitions are a source of shame.

Yemeni-Swiss political scientist Elham Manea shares, "Wherever Islamists become active, they start by targeting women. The easiest, most visible and most successful means of control, however, is the hijab, the Islamic veil. With this, Islamists are marking their territory."

The North American Islamic Trust (NAIT), a foreign-financed Muslim-Brotherhood front (according to the FBI), holds the titles of over 325 properties in 42 states and the deeds for about one-fourth of the mosques in the U.S. While it says it doesn't interfere with the daily management of these mosques, it is "available to support and advise them regarding their operation in conformity with the Shariah."

The Chicago Tribune documented how moderate Muslims witnessed an Islamist transformation of the Mosque Foundation in Bridgeview, Illinois, for example, that included giving the deed to NAIT.

The government of Turkey built a 15-acre, $100 million mega-mosque in Lanham, Maryland. When Turkey's Prime Minister Erdogan visited the site on May 15, 2013, the state of Maryland was officially represented at the event by its Secretary of State John McDonough.

The question is, why does the promotion of hijabs as representation of Muslim women or the mushrooming rate of foreign-funded mosques continue to be ignored by the public at large as a risk factor for Islamization?

One reason is the inclusion of Islamist personalities and movements into mainstream politics. In America, we have seen the emergence of two such prominent politicians:

In an article with Helene Aecherli, Manea discusses how Sweden was infiltrated by Islamist ideology. It is telling to see how a similar process is taking place in the U.S.:

Social Democrats and Greens in Sweden worked hand in hand with Islamists, believing Islamists to be authentic representations of the community. This paved the way for religious curriculum at schools, gender-segregation, public prayers and so forth despite humanist values like the separation of religion and state.

The same relationship has advanced Islamist causes in the United States. The Supreme Court recently declined to hear a case of a Christian high school student in Maryland who, despite threats of receiving a failing grade, refused to deny her faith by making a written profession of the Muslim conversion prayer known as the shahada. The assignment, given in her public school, was part of a class which unfairly promoted Islam over other religions.

Looking for new voters, socialists in Sweden turned to Islamists, who are the most vocal and best-organized groups in the country. Specifically, the Muslim Brotherhood in Sweden reached out to initiate dialogue, which the socialists and the Green Party jumped on.

In the U.S., we have seen the same phenomena with CAIR and other Muslim-Brotherhood-linked groups. CAIR, specifically touts itself as the largest Muslim "civil rights" group in the U.S.

Social Democrats in Sweden trained members of the Muslim Brotherhood on how to integrate into the political system.

A Swedish-American women's rights leader who spoke to Clarion on the condition of anonymity is extremely worried about what she sees on the ground in her birthplace, Sweden, and how striking those parallels are to what's going on in the United States.

"Social Democrats, the Green Party and the Center party have been infiltrated. They first normalize hijabs and veils by calling people who question these racists.

"At the same time approximately 240,000 young girls live with the honor code. One in nine murders in Sweden in 2018 was an honor killing. The more they say that hijab is purity or being a real Muslim, the more these violent honor codes are carried out. This problem ties into a lack of education.

"The refugees [in Sweden] the last years have 3.6 years on average of education and they come from poor patriarchal clan societies. They are impossible to integrate. Ninety counties are going bankrupt because of this; the refugees can't read or write and they're now living in a highly educated country. Their lack of education makes them unemployable. [This is fueling Sweden's gang problem in migrant communities.]

"And now these communities are insisting on their own Islamic 'free schools' that is costing the Swedish government 40 million dollars in taxpayer money over 20 years.

"One of these schools had a radical imam and six returning ISIS warriors worked there are teachers -- they still work there as teachers. They have not closed it ... [The six were allowed to remain on humanitarian grounds.]

"At another Islamic free school, young girls were threatened and hounded if they didn't wear hijabs. That school the government closed down last week. The owner of that school was arrested but released as he can't be deported to his home country due to U.N. laws.

"They are building a mosque by my mother's house that has invited radical Salafist radical speakers who preach oppression and abuse of women ... I'm writing an op-ed for my local paper, however they will probably be afraid to print it.

"Radical ISIS imams that were arrested in Sweden were just let out of prison because international European Union law says you can't deport them as they can be tortured in their homeland. It is beyond terrifying what's going on.

Our source adds that out of the biggest 25 mosques in Sweden, 17 are funded by Qatar, or Saudi Arabia, Turkey, Iran -- noting that these are not locally-raised funds but foreign investments (with foreign control).