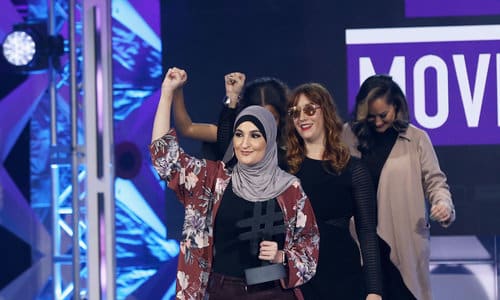 Bernie Sanders has teamed up with Linda Sarsour, who is now working as Sander's campaign surrogate.

For those unfamiliar with the term, a campaign surrogate is a celeb or media personality who goes out on the trail for the campaign, stumping on the candidate's behalf.

Linda Sarsour is an Islamist activist with ties to Muslim Brotherhood and terror-linked organizations, sharia-apologist and self-identified feminist (except, we might assume, when her feminist stances would conflict with sharia law - which we can assume is quite often).

Quite the personality for a candidate for the American president to be aligned with.

Yet for us, the voters, it's nice to have such clarity about a candidate.

Whereas Congresswoman Ilhan Omar made it a point to state that she didn't support the anti-Semitic Boycott, Divest and Sanction (BDS) movement against Israel while on the campaign trail, right after she was elected, she declared the opposite -- stating that well, yes, she did support BDS after all.

With Linda Sarsour stumping for him, we now know what he believes in (besides socialism):

Anti-Semitism - Sarsour's record is pretty clear here: She supports to the BDS movement, which has been deemed at its core anti-Semitic (according to the definition of anti-Semitism adopted by the State Department and 31 other countries).

In fact, Sarsour's Women March (of which she is a founder and leader) was so plagued by anti-Semitic scandals that even major Leftist organizations (including Democratic National Committee, the Southern Poverty Law Center, Emily's List and the National Organization for Women, pulled their sponsorship)

Sharia Law - Sarsour has touted sharia governance, tweeting about sharia's prohibition on interest in banking as an indication of how positive a sharia-run society would be (she conveniently left out those nagging problems of the hudud punishments and women's equality).

She even managed to promote Saudi Arabia at a time when women were forbidden to drive in the kingdom, tweeting, "10 weeks of PAID maternity leave in Saudi Arabia. Yes PAID. And ur worrying about women driving. Puts us to shame."

Muslim Brotherhood - She regularly speaks for Muslim Brotherhood front organizations (designated as such by the U.S. government) and those with terror ties, including the Council on American-Islamic Relations (CAIR) and Islamic Society of North America (ISNA).Click here to watch a clip of Sarsour's latest hate-filled speech at the recent ISNA conference.

At a Muslim American Society joint event with the Islamic Circle of North America, Sarsour posed for a picture with Salah Sarsour, a Hamas operative who was jailed by Israel in the 1990s for working with the terror organization.

That Bernie Sanders - or any candidate - would align themselves with Linda Sarsour and her Islamist agenda should be shocking. Unfortunately, it's not.

Most of the candidates for president from the Democratic party have been pulled to the Far Left by their PC tyrants, which include Ilhan Omar, Rashida Tlaib and Alexandria Ocasio-Cortez, who have served to normalize radicalism and bigotry in the halls of Congress.